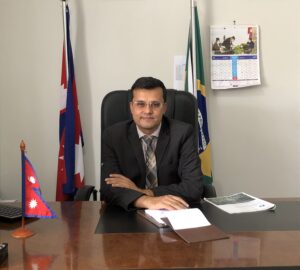 Nirmal Raj Kafle is Ambassador-designate of Nepal to Brazil from 8 September 2022. Prior to that, he was Joint Secretary in the Ministry of Foreign Affairs of the Government of Nepal looking after the Europe and the Americas Division.
Mr. Kafle served as Deputy Permanent Representative of Nepal to the United Nations in New York from 2016 to 2019. Between 2011 and 2016, he served in the Ministry in various portfolios, including economic diplomacy. Mr. Kafle held the position of Counsellor at the Embassy of Nepal in Beijing from 2007 to 2011. He was Section Officer and later Under-Secretary of the United Nations Division in the Ministry from 2005 to 2007. Before joining the Foreign Service, he was a Section Officer of the Ministry of Education and Sports from 1998 to 2005 and Administrative Officer at the Nepal Agricultural Research Council between 1995 and 1998.
He holds a Master’s degree in Public Policy and Management from the University of Melbourne, Australia (2004) and a Master’s degree in Business Administration from the Tribhuvan University, Nepal (1998). Mr. Kafle, a native of Godawari -6, Lalitpur, is married to Mrs. Saraswati Kafle and they have two sons.